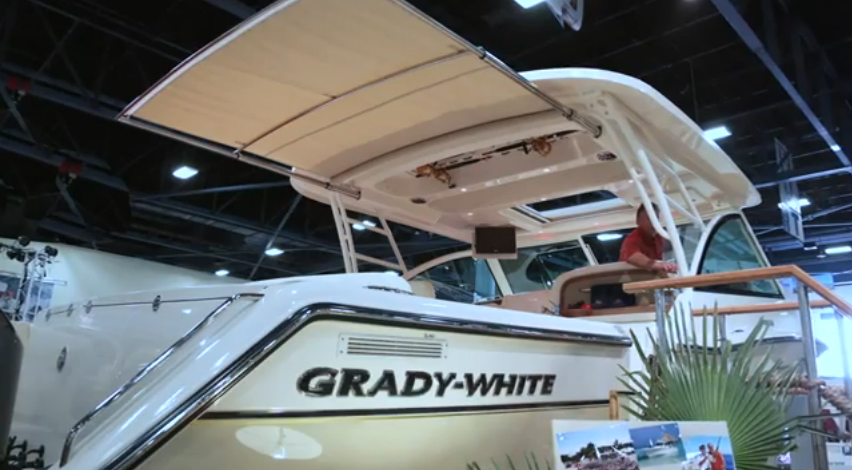 PHILADELPHIA, PA – March 25, 2013 – SureShade, the designer and manufacturer of retractable sunshade systems for the marine industry, is now available as a standard factory-installed feature on Grady-White’s all-new Freedom 375. Grady-White has become the first U.S. boat builder to offer a SureShade sunshade system as a standard feature on a new boat model, further establishing SureShade as the new standard for boat shade.

Debuting at the 2013 Miami International Boat Show, the all-new Freedom 375 was showcased fully equipped with a SureShade automated shade system. As a standard feature on the boat, canvas electrically extends enabling full shade coverage for the cockpit of Grady-White’s largest model in the Freedom series.

“The SureShade sunshade system was such a desirable option for Freedom 335 buyers that we knew we had to make it a standard feature on the new Freedom 375,” said David Neese, VP of engineering at Grady-White Boats. “Grady-White customers are demanding today’s most innovative boat features, and having a SureShade to extend shade the full length of the cockpit is an important feature for passengers who want to stay out of the sun and still enjoy a full day out on the water.”

“While SureShade is already available as a factory-install option on over a dozen boat models, we are thrilled that Grady-White has chosen to offer our shade as a standard feature on the Freedom 375,” says Dana Russikoff, SureShade business leader and co-founder. “SureShade’s company vision is to set a new standard for shade in the boating industry, and with a growing number of builders now offering the shade as a standard feature, that vision is starting to be realized.”

In addition to Grady-White in the U.S., Scandinavian boat builder Delta Powerboats began offering SureShade as a standard feature on their Delta 54 IPS in 2012. SureShade will also be available as a standard feature on Back Cove Yacht’s new Back Cove Downeast 37 set to launch in July 2013 and on the new Grand Banks 50 Eastbay also debuting in 2013.

To learn more about our portfolio of boat brands featuring SureShade retractable shade systems, visit us at www.sureshade.com/boat_brand_gallery.

See more photos of the all-new Freedom 375 with SureShade as a standard feature on our Grady-White brand page.