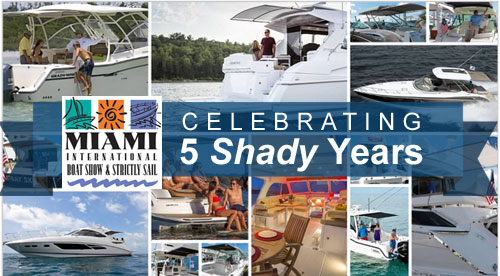 PHILADELPHIA, Pa. – February 5, 2013 – SureShade, the designer and manufacturer of retractable sunshade systems for the marine industry, will be celebrating the 5th anniversary of the commercial launch of their marine sunshade system at the upcoming 2014 Miami International Boat Show (February 13-16). Over 30 boat models are expected to showcase the SureShade sunshade system as either factory option or standard equipment –including 10 new models in the SureShade OEM portfolio – representing a threefold increase from the 2013 Miami event.

Since the company’s first commercial display on the Boston Whaler 370 Outrage at the 2009 Miami Boat Show, SureShade has experienced exponential growth year over year with a track record of doubling or tripling show displays. Boat manufacturers continue to choose to launch new models with SureShade, or redesign existing models to accommodate consumer demand for the sunshade system. In five short years the OEM portfolio has grown to include over 30 boat models on 20 different boat brands, representing a significant shift in how builders integrate sunshade into boat designs.

New boat models to feature SureShade being announced at the 2014 Miami Show include:

“When SureShade first debuted at Miami we were a start-up and industry unknown, but within five short years the industry has embraced this innovative value-added product line and boaters are demanding it as the new standard,” said Dana Russikoff, business leader and co-founder at SureShade. “Our 2014 Miami showcase marks not just another significant milestone for our company, but really a success story for the entire boating industry with its early adoption of this new technology despite the economic downturn.”

In addition to new models that offer factory installations, SureShade works with boat dealers to sell and install aftermarket shades on both new and existing models, creating a revenue stream for dealers that did not exist five years ago. SureShade now has its patented sunshade systems installed on over 35 boat brands worldwide.

To see exclusive event photos of featured boats at 2014 Miami International Boat Show, follow @SureShade on Twitter or Instagram along with the hashtag #MiamiBoatShow for live sharing of event pictures.